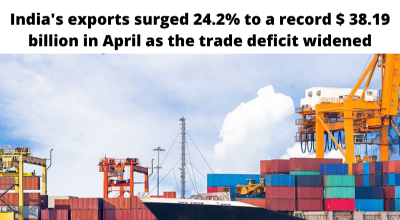 The commerce ministry said,” In April we recorded the highest exports as the April exporter jump to 24.22% continuing the record-breaking 2021-22  exports.

A Sakthivel, the president, of the Federation of Indian Export Organisations (FIEO), said,” Labour-intensive sectors also contributed to exports basket that is helpful for job creation in the country”.

In comparison to April 2021, the price of gold imports decreased by 73% and imports of petroleum and crude oil rose to 81.21%

Although the non-oil trade deficit is stable, the decline in gold imports has been offset by the increase in non-oil non-gold imports such as coal and chemicals, and the composition has changed, Nayar said. However, the expected consequences of rising commodity prices are caused by the conflict between Russia and Ukraine. "

According to the data, imports of non-oil, non-gold, silver, and precious metals, which are indicators of the strength of domestic demand, increased by 29.68% in April.

Nayar said the trade deficit could be increased by $ 20 billion in most months of FY 23 if commodity prices do not fall significantly.

“There are certain challenges that are hitting both the engineering and other departments, such as high logistics costs and rising raw material costs,” says Desai.

FIEO has promoted logistical support in this sector due to the increased cost of cargo, as well as the use,  expansion, and effectiveness of scrips under various programs.