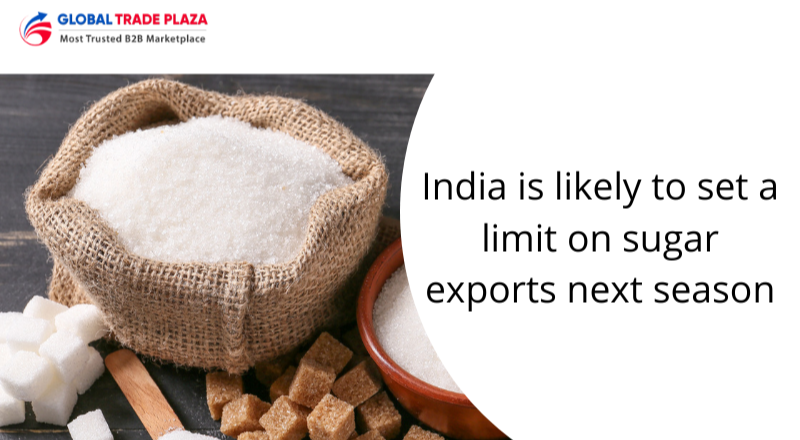 Industry and government sources said on Friday that India is likely to impose a cap on sugar exports for the second year, beginning in October, to secure enough domestic supplies and keep local prices under control.

According to industry and government sources, India, the world's largest sugar producer, may limit sugar exports to 6 million to 7 million tonnes in the 2022/23 October-September season, almost one-third less than the current season's total. They requested anonymity since they were not authorized to speak to the media.

A request for a response from the government was not immediately returned.

Lower sugar supply in Brazil, the world's largest producer, and exporter, and crude oil prices at multi-year highs are among the reasons driving global sugar prices this year. As crude oil prices climb, sugar mills are diverting more cane to make ethanol for use in fuel.

Brazil's sugar production is expected to rebound this season, but with India's exports restricted, traders do not expect prices to fall, and instead expect them to rise.

"There is a need to limit exports to minimize market panic," a senior government official said.

The export cap for next season is expected to be set between 6 million and 7 million tonnes, according to sources, but the actual amount will be determined closer to the start of the 2022-23 season.

The administration will analyze the monsoon's performance before deciding on the quota.

According to weather office data, monsoon rains in sugarcane growing areas of western India's NSE -2.00 percent state of Maharashtra, the country's largest producer, have been 60 percent below average since the start of the rainy season on June 1.

Exports are at an all-time high this season, which might mean big things for the economy.

Industry and government forecasts show that record exports in the current season might reduce stockpiles to 6.5 million tonnes on Oct. 1, when the following 2022-23 season begins, compared to 8.2 million tonnes a year earlier.

According to a letter seen by Reuters, Aditya Jhunjhunwala, head of the Indian Sugar Mills Association, has requested that the government enable mills to export 8 million tonnes of sugar next year, as output could be surpassed next year. record 36 million tonnes. A request for comment from the association was not immediately returned.

The letter also encouraged the government to decide on next year's export quota as soon as possible to allow mills to benefit from strong global prices.