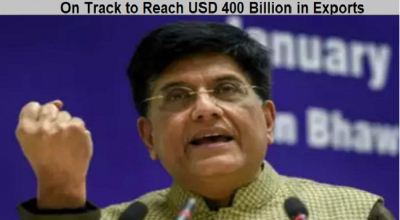 Export promotion through subsidies has not yielded the optimal outcomes, but the government's RoDTEP scheme is assisting in the growth of exports, which are expected to hit a new high of USD 400 billion this year, according to Commerce and Industries Minister Piyush Goyal, who spoke in the Rajya Sabha on Friday. Goyal claimed the government has seen "very good acceptance" of the RoDTEP (Remission of Duties and Taxes on Export Products) plan while answering questions during Question Hour in the Upper House about budget cuts for export-oriented initiatives.

Goyal went on to say that India has moved towards a more interconnected economy, in which such subsidies are not even authorised under WTO rules. In some cases, India has been summoned before the World Trade Organisation (WTO) for export subsidies.

While many believe that the government has cut export subsidies, Goyal claims that India will have a "record performance in exports" this year. "We are already crossed USD 334 billion (one billion is equal to Rs 100 crore) of exports, which is higher than any full year ever in the past, and we are well on track to go to USD 400 billion export in the current year," he said.

Goyal stated that no nation can exist beyond a certain point in time depending solely on export subsidies. He also said that every country has particular products and services that constitute its backbone. Every idea in the world argues that the emphasis should be purely on export products with a significant advantage.

He explained that if any additional tax is collected on any exported goods that are not tradable or recoverable in the form of a refund, it is returned to the exporters under the RoDTEP plan. The minister also advised all states to boost economic growth by exporting goods and generating employment in the sector.

"Therefore, our approach is that we reimburse the taxes or cess or duties that are notified on the product by the states. As far as the central government is concerned, usually most products are under the GST (Goods and Services Tax) and it automatically gets refunded when you export the product," he said.