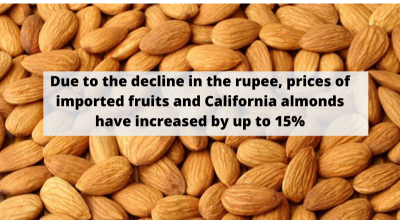 Due to the rupee's devaluation, the prices of Californian almonds, Washington apples, imported cherries, kiwis, and berries have increased by up to 15%, harming the increase in home demand that followed the second wave of Covid-19.

Californian almond prices have risen by up to 10%, claim sellers from Delhi's Khari Baoli market, one of the largest fruit markets in the country. The rupee is expected to weaken even more against the US dollar, dry fruit importers are now looking to Syria and Afghanistan to import less expensive almonds.

According to Vijay Kumar Bhuta, head of the Bombay Dry Fruits and Date Merchants Association, "the dealers are concerned about what would be the price in September when the new Californian almonds will come.” 36,000 tonnes of dry fruits and spices are brought into India annually.

Indians have started consuming more imported fruits, such as kiwifruit from Chile and New Zealand, and apples and blueberries from the US, which are thought to help develop immunity. Since April of last year, during the second wave of the epidemic, imports of these fruits have grown by 20 to 30 percent.

However, the price of imported fruits has been affected by currency depreciation and supply-chain concerns, according to Sumit Saran, a Washington Apple Commission official for India. "Apples from Washington are imported.

At an average landed price of Rs 120–150 per kg, India imports 200,000 tonnes of apples yearly. Even though India increased duty on the juicy fruit to 75% from 50% after the then-Trump administration raised tariffs on Indian exports of steel and aluminum to the US, imports of the variety from the US state of Washington had decreased to just 381,614 cartons in 2020–21 compared to 1.07 million cartons in the pre-pandemic 2019–20. The most significant obligations remain.