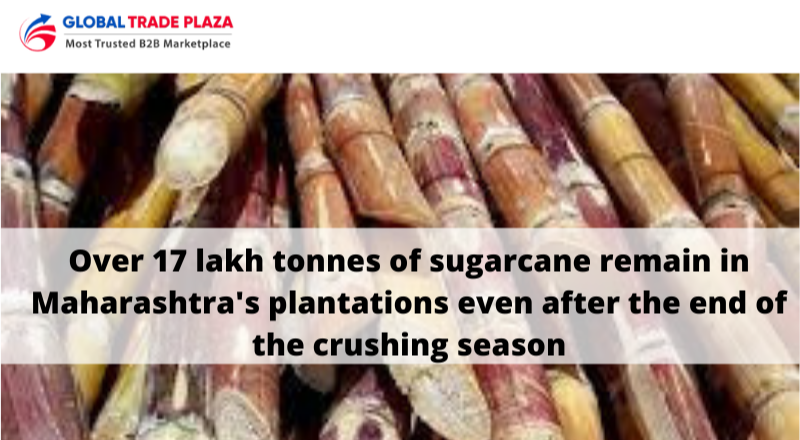 The reports revealed that most 17.5 lakh tonnes of sugarcane remain uncut on Mahashtra's farms. However, the govt. The official said that the majority portion of this stock will be crushed by the end of this month, and approximately 30 sugar mills will continue operating until the season is complete. In Maharashtra, the season of sugarcane crushing typically begins in October or November and lasts until mid-April.

According to the reports,  Seven out of Maharashtra's ten districts with the most extra sugarcane stock this year are from the Marathwada region.

Even though the sugarcane crushing season is done, the state still has roughly 17.5 lakh tonnes of sugarcane waiting to be crushed on farms.

He also revealed that crushing may continue in some sections of the state until the first week of June.

Shekhar Gaikwad, the Maharashtra sugar commissioner, told PTI, "Around 17.5 lakh tonnes of sugarcane are currently available in farms across the state. By May 31, the majority of this crop will have been crushed. Crushing may continue in some areas of Ahmednagar and Jalna districts till the first week of June."

He also said, "We have so far been successful in attracting 129 harvesters from other states to operate in Marathwada. At this moment, 29 harvesters are operating in Jalna alone.”

He stated that around 30 sugar mills in the state may continue to operate till the end of May.

By May 15, 126 of the state's 199 sugar mills had ceased operations for the season. By May 25, this number could rise to 163. The remaining 36 sugar mills may continue to operate until the sugarcane supply runs out, according to the official.

Sugar commissioner Gaikwad predicted a 25-thousand-per-day increase next year. He said, "We expect the same sugarcane cultivation area next year." However, the objective is to start the sugar mills 15 days earlier than usual (by October 1), with increased manpower and crushing capacity of 6-7 mills. Currently, the state can crush 8 lakh tonnes of sugarcane every day.

"In the coming season, the number of factories operating on distillery production will reach 50-60."

India got approval from Egypt for being a wheat supplier; to import around one million Tonnes