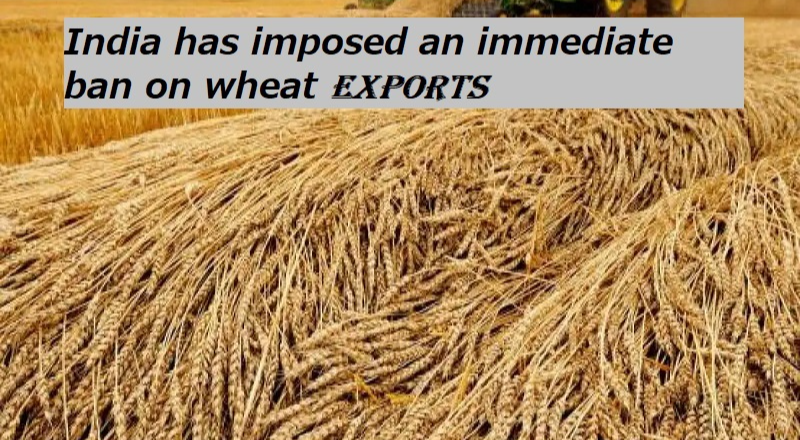 India has suspended wheat exports with immediate effect as part of its efforts to contain rising domestic prices.

The ministry stated that only export shipments for which letters of credit were issued on or before yesterday's notification would be allowed.

Furthermore, according to the notification published by the Directorate General of Foreign Trade (DGFT), the government will allow exports on request from other countries.

According to the notification, the government made the decision " In order to manage the country's overall food security and to meet the requirements of neighboring and other vulnerable countries."

After shipments from the Black Sea region dropped since Russia's invasion of Ukraine in late February, global consumers had been considering India, the world's second-largest wheat producer after China, for supply.

After a large crop loss owing to a heatwave in March, the decision to limit wheat exports was made. Inflation, which hit 7.79 percent in April, is also putting pressure on the government.

Furthermore, the action comes just two days after the government administration revealed its plans for a major export push.

"The Centre will send trade delegations to Morocco, Tunisia, Indonesia, the Philippines, Thailand, Vietnam, Turkey, Algeria, and Lebanon to investigate ways to increase India's wheat exports. In response to increased global demand for wheat, India has set a target of producing a record 10 million tonnes in 2022-23 ", the government issued a statement.

Due to the rise in demand for Indian wheat in the global market, farmers, merchants, and exporters have been asked to adhere to all quality standards set by importing countries so that India may establish itself as a reputable wheat provider.

According to a government press release, M Angamuthu, Chairman, Agricultural and Processed Food Products Exports Development Authority, said at a wheat exports sensitization meeting in Karnal, Haryana, "We are extending our support to all stakeholders in the wheat exports value chain for boosting shipment from the country."

The Department of Commerce further stated that they are planning to organize several seminars in major wheat-growing states like Punjab, Haryana, Madhya Pradesh, Uttar Pradesh, and Rajasthan.

A top official from India's Ministry of Consumer Affairs, Food and Public Distribution told Reuters earlier this month that the country has no plans to restrict wheat exports.

"There are no plans to restrict wheat exports because the government has ample wheat inventories," Food Secretary Sudhanshu Pandey stated at the time.

During a recent visit to Germany, Prime Minister Narendra Modi addressed the Indian diaspora at an event that Indian farmers "have stood forward to feed the world" amid a global wheat scarcity. "Whenever humanity faces any problem and hard situation, India is the first to respond and always comes up with a solution.”

When it comes to the question that why there is a sudden change in the government plan, then it was revealed that China is importing food grains from India due to crop losses that have caused food insecurity there.

After five years of record harvests, India lowered its wheat output prediction to 105 million tonnes from 111.3 tonnes in February after the warmth reduced crop yields.

The DGFT announced the easing of export conditions for onion seeds in a separate announcement. "With immediate effect, the export policy of onion seeds has been placed in the restricted category," it stated. Onion seeds were previously prohibited from being exported.

India got approval from Egypt for being a wheat supplier; to import around one million Tonnes